The Bluetooth module for my Arduino (the JY-MCU) arrived a few weeks ago.  It was really inexpensive ($8.20), but took a long time to ship (3 weeks or so).  I picked it up from Deal Extreme (http://dx.com/p/jy-mcu-arduino-bluetooth-wireless-serial-port-module-104299). 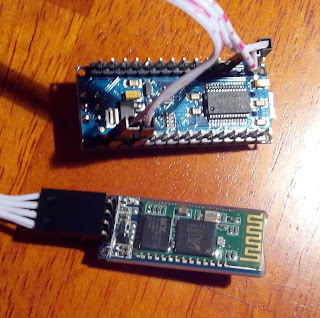 Be sure you hook it up correctly! One of the disadvantages of this Bluetooth module is that it apparently doesn't have any power protection.  So you could easily short it out and release the magic smoke.

Once it was powered on I was able to scan for it using my Android phone and pair with the Bluetooth module (It shows up as 'linvor' and the pairing code is 1234).

Programming the Arduino
The next order of business is programming the thing.  I'm not looking to do exactly what this instructable did, but it's a good place to start: http://www.instructables.com/id/Androino-Talk-with-an-Arduino-from-your-Android-d/

I used this code for inspiration (I'm not using the same pins as the instructable [it interferes with the normal serial port on the arduino] so I needed to use the software serial port instead): http://pastebin.com/raw.php?i=xmyr840j and wound up with this:

For python for android I installed 'Python3ForAndroid_r6.apk'.  Once it's installed  you actually have to start the application (called 'Python3 for Android') and click 'Install' to let it install whatever it needs before you can go any further.

Now I don't have the sensor they're using, so I'm just using this as a quick example to get an LED blinking.

I started SL4A on my Android (to make sure it could create its directories before I uploaded anything).  Then I plugged the phone in to my computer and copied the androino files above to /sdcard/sl4a/scripts/.

Open the SL4A app and click the 'get sensor data' button.  The LED should toggle (and 'hello world' should show up on the webpage on your Android)

It ain't pretty and definitely needs some work, but it was pretty easy (took maybe 30 minutes total).  Now I can blink an LED on the Arduino wirelessly using Bluetooth.  That's not much, but triggering other hardware should be pretty similar.  That's for next time.
Posted by Tom Hennen at 5:57 PM